Recently the hit TV show Mythbusters 14 year run came to an end.  As a geeky, techy, tinkerer type I gravitated to the show from episode one.  I will admit I did lose a little interest near the middle part of the run when the show became formulaic and was more sensational than serious.  That said, one of the things I admired about the show was their willingness, and sometimes propensity, to fail. 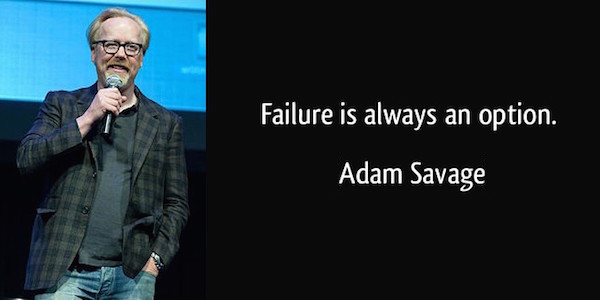 What does Mythbusters have to do with ECOA?  Well, if you were paying attention to recent events you may have noticed the 2016 No Highways Tour fell flat on it’s face when I reached Denver.  Even after shortening the trip and falling back on a contingency plan of only the first third of the original plan, it still managed to fail.  Does that mean the end for this year’s NHT?  Read on to find out…

I will be the first to admit my own shortcomings and failures.  I have a rather strange sense of self-awareness and a complete disregard for saving face.  It’s in the light of my failures that I learn the most.

As I’ve previously mentioned I spent ten years in the outdoor education field.  One of my specialties was experiential learning.  During my academic years I wrote many papers on Experiential Learning Theory and drew upon my experiences in outdoor ed to back up the theory side of things.  Failure is a major component of experiential learning.  It’s not meaningless mindless trial and error though.  There’s a cycle, as outlined by the theorist David Kolb, that involves experience, reflection, abstraction, and experimentation.  Focus too much on one side and you’ll get stuck.  On one end you a have the experimentation and experience.  Get bogged down there and that’s when you have the mindless meaningless trial and error.  On the flip side if you get stuck on the abstract and reflection side you have what’s commonly referred to as “analysis paralysis.”  These are the types that are afraid to try or do anything for fear of, well, almost anything really.  These are the hypochondriacs, the shut-ins, and the types to never do or try anything new.  Both are equally bad in their own right.

Now this is an overland lifestyle blog and not an educational theory blog, but for me it’s hard to dissect the two internally and my background with the above it what influences what about to say next.

There are many people who don’t like admitting failure.  To some it’s a sign of weakness.  Our society has put such an emphasis on success and perfection that failure is almost worse than death.  There are also many people who don’t like to even experience failure, let alone admit it.  Failure is embarrassing.  Failure is painful; if not physically it can at least be emotionally painful.  Coupled with a society who loves to prey on the failures and shortcomings of others to experience failure is often to invite ridicule.  The moment you step out of line to try something unique you’ve put a target on your back.

Taking a look at the big picture, there were three main issues that led up to the “false start” and my inability to make it to Moab for Easter Jeep Safari.

Luckily I had a friend in Denver who was willing to put me up for the night.  As the snow continued to fall, and the initial forecast of 8-12 inches slowly crept up to warnings of 24+ inches I came to the conclusion I made the smart move.  It sucked to be stranded in Denver with little hope of continuing on to Moab till it was too late.  I could, in theory, have limped my Jeep the rest of the way and pulled into Moab at o’dark’thirty Wednesday morning — had it not been for the storms.  I could also have made my way to Moab Thursday once things cleared up — only to hit Easter Jeep Safari on it’s final days.
In retrospect, all things considered, I probably shouldn’t have left PA in the first place.  Too many loose ends.  Too many half-finished items on the to-do list.  Too many little gremlins that needed addressed before a cross-country trip of this scope and magnitude.  However, I did leave.  I was stuck.  That’s when I made the decision to turn back.
The question then becomes, now what?  In the face of failure, what next?
While the snow fell in the background I spent a lot of time looking my my plotted course, my goals and ambitions for the 2016 No Highways Tour, and my goals and ambitions for ECOA.  I was willing to admit failure, on a number of levels at that, and return home to regroup, repair, and come up with a new plan.
There will still be a 2016 No Highways Tour.  Albeit a brief one.  An even briefer one than the previously proposed contingency plan.  I’m still obligated to be at Overland Expo West in Flagstaff Arizona in May.  My goal will be to spend a week in Utah and another week in Arizona before hitting up Expo.  After Expo I’ll take a week to linger in Colorado before heading back home.  Once back in PA I’ll flip over to show mode and do a few local events over the summer and maybe some short trips in the mid-atlantic region.  Then in the fall I’ll hit up the VT Overland Rally and Expo East in NC.

At any rate, I’m willing to admit the failure.  I own that.  I’m also willing to admit it’s not over yet.  Failure is not the end.  Per Kolb’s experiential learning theory, I’ve had my experience, I’ve reflected on it, now I’m working on a new plan, and in a few weeks I will put that plan into action.