After a day of volunteering on the tear down crew at Overland Expo East I hit the road in the mid-afternoon.  With my sites set north I relished in the idea of a warm shower and a comfy bed after a 400 mile drive to PA. 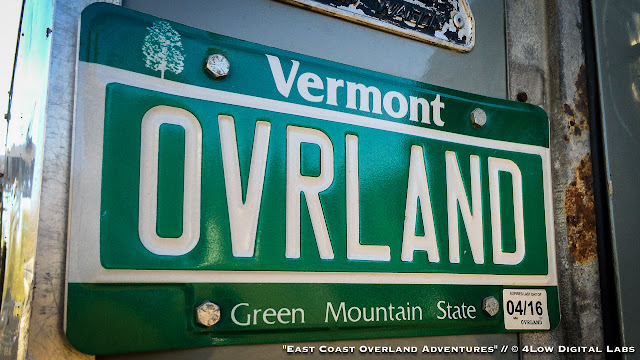 After taking two days to do laundry, nurse my feet back to reasonable health, and reset the gear in Jeep I left for Vermont to attend the Vermont Overland Rally.  Little did I know just how much my perseverance was going to be tested on the last weekend of this three week swing of events.

For those that have never been to Vermont, let me just say how much you’re missing out.  Hands down the mountains and forests of Vermont are some of the most breathtaking sites in New England. The whole area is a step back from the hustle and bustle of modern day America.  The towns are smaller.  The people are nicer.  The pace is slower.  The views are more spectacular.  Oh, and the roads.  The roads are a mix of paved, hard-pack, soft-pack, two-track, and single-track.  They range from soft-roading which almost any car could tackle up to technical trails where a winch could mean the difference between success and failure.

Arriving at the rally location on Thursday much later than anticipated, I found many campsites setup and signs many people were out enjoy the local roads and trails.  I had made tentative plans to connect with a fan and supporter of my “No Highways Tour” trip as well as a fellow Redditor from the /r/overlanding sub-reddit.  As I mentioned before, events like this are a great way to network with fellow enthusiasts.  As we drove the grounds looking for a place to make camp we nestled ourselves in between a few Jeep and a Toyota 4Runner.  With the hour late, we called it a night and made tentative plans to hit the trail Friday even thought it was supposed to rain.

Opting to leave my wounded Jeep parked at camp I jumped in the JKU-R and the two vehicles set out to run some of the pre-routed loops prepared by the Vermont Overland staff.

Although the weather was crappy and it rained all day, the trails we ran Friday were loads of fun and ranged from hard-pack to some pretty technical sections.  The VO staff color codes their trails in highlighter yellow, for basic routes on either paved or unpaved roads, green for soft single-track sections, blue for more technical sections, and red for challenging sections.  It should be noted that these color ratings do not correspond to trail rating system at a place like Rausch Creek ORP where the green/blue/black/red system equates to an east/medium/hard/insane difficulty rating.  The VO routes are setup for overlanders and even a mildly built rig, by rock-crawling standards, could tackle the more difficult trails with some solid driving and spotting skills.  Had the LJ been at 100%, and the suspension not been overloaded, I think I would have given the red/challenging sections we did a shot.

One of the highlights of the day Friday was stopping at a local place for lunch that was about midway through our route.  We made a stop for fuel and decided to just stop for food as well.  I had an absolutely amazing Monte Cristo sandwich complete with a bowl of local VT maple syrup for dipping.  I’d probably drive back to VT just for one of those sandwiches.

Back on the road we snaked our way through the VT countryside bouncing on and off pavement like an indecisive squirrel darting in and out of the woods.  Eventually we made our way back to camp in time for the two-hour workshop window.  During that time I was on hand to discuss photography and visual storytelling but it seemed the rain had kept everyone either undercover at tent or inside their rigs out on the trails.  Once the workshop period ended our group opted to head back into town for some more local food.

The next day the weather cleared and things started to dry out.  The soft squishy mud was a little less soft and a little less squishy.  It was, however, still super sticky and very very slick.  This time around the group picked up a third vehicle and together everyone opted to tackle a challenging “Vermont Overland Trophy” route.  The first section was a typical mix of paved and unpaved hardpack roads.  Once we hit the first red section we knew it was going to be a good day.

Winches were used. Rocks and logs were stacked.  Much spotting was done.  We came, we saw, we conquered , well, at least two-thirds of the group did.  While struggling to get the 4Runner up the slick mix of mud and rocks another group caught up to our tail.  With the pressure on we opted to let the 4Runner back down since it lacked a front locker or a winch.  The other JKU was offered a chance to try it three time.  The first two resulted in little progress beyond the large rock ledge in the middle of the first part of the trail.  With a generous backup, a new angle of attack, and a liberal sweeping approach the JKU’s traction control kicked in and it walked over the rock ledge and up the rest of the trail without much effort.

Once both JKU’s had made their way through the challenge section the 4Runner caught up to the group after taking a re-route to bypass the red section on the map.  Once reunited the three rigs continued following the VOT route down some of the most epic trails I have ever been on as an overlander.

If you think about what it means to be an overlander and the trails we like to travel there are a few iconic elements that are a surefire way to get the blood pumping.  First, stream crossing.  Sprinkle a few of those along a route and you’re guaranteed to get drivers and passengers excited.  Second, add a few off-camber sections to get the pucker factor up.  Lastly, make sure the trail winds its way through some of the most scenic terrain with earthy hues, beautiful views, and bright vibrant foliage and you have a recipe for success.  The crew at Vermont Overland have done just that.

Back onsite I prepared for another two-hour workshop and was pleased to actually spend the majority of the time talking to people about photography, storytelling, and documenting overland adventures.  While I fulfilled my obligations the three rigs continued on the VOT trail.

Saturday night was the big social night of the event.  A large bonfire brought everyone together for a chili dinner, raffle prizes, and more than a few tasty beverages.  After the fire, with a belly fully of chili, I made my rounds visiting campsites and connecting with people I had met at earlier events.  One thing I was keeping an eye out for was the tell-tale beam of light in the sky signaling funnel cakes would be ready.  Yes, you read that correctly.  Fresh funnel cakes at an overlanding event.  Round 9pm the light went on and the familiar smell of fried vanilla dough wafted through the campsites.

After a few hours of fireside and fryerside socializing I reluctantly turned in for the night.  Although I would normally have stuck around on Sunday morning I put myself on a bit of a timetable knowing the LJ wasn’t at 100% and that it would be a long slow drive home.

After snaking my way down the backroads of Vermont, New York, and PA the LJ finally decided it had enough.  I was able to limp the Jeep into the parking lot of Cabela’s and decided I had enough as well.  I pulled out my AAA card and phoned for a tow-truck.  But this point my 400 mile drive that would normally only take six hours was pushing 8 hours and I was only 75% of the way home.  I feared pushing that last 100 miles would push both the Jeep and myself passed the point of no return.

Loaded up on the rollback I sat in the passenger seat of the truck as we motored down the freeway toward the setting sun.  It seemed fitting that after an epic year full of check engine lights, more than a few tows early on, a 7,600 mile epic adventure over the summer, and a long three-week swing this fall that I’d be riding off into the sunset not in the Jeep but with it on a tow truck behind me.

To be honest, I wouldn’t change a thing if I could.  It wouldn’t be an adventure if everything went according to plan, would it?  Although, it does give me some ideas for the 2016 season of ECOA and the 2016 No Highways Tour.