Lighting Upgrades: The basics (Lighting terminology and types of lighting)

A while back I did a writeup on some electrical upgrades to the ECOA Wrangler Unlimited. I was having an issue with battery drain and it turned out to be a bad ground. Long story short, having already dealt with wiring issues on past Jeeps, I just went ahead and did all new cables under the hood along with a new battery. I haven’t had any issues since <knocks on wood>. This time around I’m upgrading the lights on the Wrangler. It’s time for some LED’s baby!

Spoiler warning: Before we get started let me flat out say that you will not find me rolling around with a 50″ light bar at the end of this writeup.  This is about upgrading the OEM lights.  I’ll also explain one of my cardinal rules: “More light isn’t always better light; but better light is always more light.”  What exactly does that mean?  Well, I guess you’ll have to read on…

First, let’s talk about some common misconceptions about lighting.

One of the biggest misconceptions about lighting has to do with wattage.  Wattage is NOT a unit of brightness.  Wattage is a unit of power and is a product of how strong a supply of energy is (amperage) and how quickly it can work (voltage).  The actually equation is W = V * A (Watts equal Volts times Amps).
When talking about the brightness of a light source there is not only the intensity of the light (how strong) but also it’s radiance (how far is spreads).  These two factors depend on the wavelength of the light as well.  Most of these factors are far beyond what you need to know as an overlander, so just remember the following:
Got all that?  Didn’t think so, but that’s okay.  It’s taken me a while to wrap my head around all that too.  Even then I find myself referring to google to double check things.  Let’s move to a practical approach and start with the OEM lights on my Wrangler as an example.
Most of that is pretty self explanatory.  The key things you’ll want to look at are the candle power rating (brightness), bulb tech (temperature), and beam spread (low beam/high beam).  There are DOT standards for how bright headlights can be and their spread, however there are some variations in temperature though. 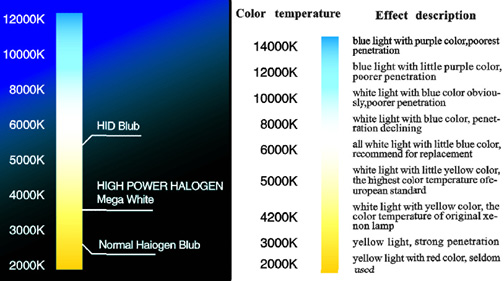 Standard halogen bulbs give off a warm light somewhere around 3,000 Kelvin.  In contrast H.I.D. lights tend to be cooler at around 6,000 K and give off a blueish tint.  L.E.D.’s are a more neutral 5,000 K whitish light.
The reason temperature of the light is important has to do with contrast.  A few years ago almost all auxiliary fog lights on 4×4’s were yellow and almost all OEM headlights were halogen.  This is because yellow light provides more contrast (the difference between white and black) than other light types.  Black and white will look very similar under blue light.  White light is obviously the best but it’s harshness can sometimes be annoying at night and will mess with people’s “night vision” causing a washed out effect.  Remember  the fiasco with the dress? That had to do with this kind of thing.
Okay, so we’ve established OEM Jeep Wrangler lights are a yellowish halogen bulb putting out around 27,000 Candle Power at low beam and 35,000 at high beam.  While there are countless upgrade options ranging from simple bulb swaps to complicated HID installations I’ve opted to go with LED’s.
LED stands for “Light Emitting Diode.”  The biggest advantages to LED’s are their low current draw when compared to conventional filament bulbs like halogens and, since they lack a filament, they tend to be a little more rugged.  Ever drop a flashlight and had the bulb go out on you?  Same idea. The other nice thing is the compact nature of LED’s makes them a much easier installation than an HID conversion.

HID’s require an external ballast to convert the 12 volts of power supplied by the vehicle to the approximate 25,000 volts necessary to create the plasma arc within the HID bulb.  Luckily it only takes around 90 volts to maintain the arc which is why HID’s are a popular alternative to basic halogen lights.  They last longer (no filaments) and provide more light with less power draw (even when compared to LED’s).

You’re probably thinking “So why aren’t you doing an HID conversion if they provide more light and use less power?”   For starters, LED headlights are a little cheaper and don’t require the complex electronics for installation. This is also where my mantra comes in: “More light isn’t always better light; but better light is always more light.”
Mantra Part 1: More light isn’t always better light.
Remember when I mentioned up above that halogen lights give off warmer yellowish light? Remember when I mentioned up above how yellowish light provides more contrast?  Well in certain situations the bright cool blueish light given off by HID’s can washout a road and make the white lane lines disappear.  The decrease in contrast tends to turn blacks and whites to grey, coupled with faded lane lines and old grey pavement, this is not good.
There’s also a physiological reaction in our eyes and how they react at night.  It takes our eyes longer to adjust to bright blueish HIDs than it does the warmer yellow halogens.  This leads to a Cold War type arms race when it comes to headlights.  Under normal conditions OEM halogens are more than adequate.  In time our eyes will adjust and be fine.  However, when faced with a mix of oncoming headlights (halogens, LED’s, & HID’s) and street lights (of various bulb types) our eyes just don’t know how to react or can’t react fast enough and we’ve compromised our “night vision.”  While not always the case, it can lead to a perception that one must upgrade their headlights to “keeping up with the Joneses” just to see the road ahead of them.

Now, to complicate matters even more, let’s add fog, rain, and snow to the mix.  Ever notice how when you turn your high beams on in the fog all you see is more fog?  Same with snow.  Want that “Star Trek’ing through space” vibe and you can flick your high beams on in a snow storm.  Just be careful because you’re liable to have an accident – or cause one if there is oncoming traffic.

The final factor is “tunnel vision.”  At night your eyes adjust to the brightest spot of light.  This takes time as the rods and cones in your eyes do their job. If there is a hot spot, or rather a super bright spot, directly in front of you, your eyes adjust to that and you loose some of your peripheral vision. Ever accidentally stare into the sun and get a white spot in front of you?  Or watch a movie in a dark room and then look away from the TV and not be able to see anything?  Same idea only complicated by the fact that you’re barreling down the road at 65 mph in a 2 ton vehicle.  This “tunnel vision” effect makes it less likely for you to see movement off to the side of the road (animals, people, other hazards, etc).  Tunnel vision also decreases depth perception.  That super bright 50″ light bar or mega hot HID’s might illuminate something in the middle of the road but without any perspective you have no idea if it’s 500 or 100 feet in front of you.  Simply put, “More light isn’t always better light.”
Mantra Part 2: Better light is always more (useful) light.
If more light was better then high beams would be the best option, but they’re not.  Not only are they too bright for certain conditions (snow, fog, rain, etc) but they aren’t aimed in the correct area either.  Notice how high beams shift the light UP and OUT when engaged?  Ever noticed how most OEM fog lights are mounted in or under the bumper?  This is because the lower angle of the light allows for the light to go under the moisture in the air and light up the road.  When they are yellow (or at least yellowish halogen bulbs) they provide increase contrast when compared to standard headlights.  It should also be noted that most fog lights aren’t any brighter than headlights and are often a lower lumens rating than low beam settings.  This is a case when “less is more.”
It’s a fine line and a delicate balance.  If you increase the quality of the light (not just the amount), and it’s a more functional light aimed in a useful way, then effectively you’ll have more light to work with.  Safer too. A bright cool light might look better but it’s not necessarily better.  A more neutral or warmer light is more useful.  The right kind of dispersion pattern will also aid in driving more than a spot or pencil beam.  Cheap lights often have poor optics in them.  They put little effort into measuring the spread of the beam.  The more expensive lights, of reputable companies at least, have put the R&D time into researching their lights rather than just cranking out a cheap knock-off product.

The above graphic is a basic illustration between the different kind of optics and their advantages.  Spot beams give you the most range but the greatest tunnel vision.  Fog beams are great low angle spreads useful in fog, rain, and snow and do their best work illuminating the terrain close to the front of the vehicle.  Flood beams are a wide open patter side to side as well as up and down.  They are not great for driving but can be useful as “work lights” or “camp lights” when stationary.  The best all-around pattern, in my opinion at least, is the driving pattern because it fills in the area around the OEM headlights without causing too much of a hot spot in the middle and still allowing for some contrast with the periphery.

Obviously we’ve only just scratched the surface here.  Hopefully you’re at least a little more informed when it comes to lighting – at least in-so-far-as it pertains to vehicle headlights.  If you take away anything from this I hope it’s the following:
Stay tuned for Part 2 which is the installation and review of a set of LED headlights and LED auxiliary lights.
Did you enjoy this post? Would you like to support it and help make future posts possible? Consider joining the ECOA Patron Support Team. For as little as $1 a month you can support the ECOA mission to Educate, Encourage, and Inspire readers like you!