A little while ago I posted a review of my ViAir Onboard Air System.  That was the first in a three part series on tire pressure management.  This week I am going to review my new set of tire deflators from J.T. Brooks. 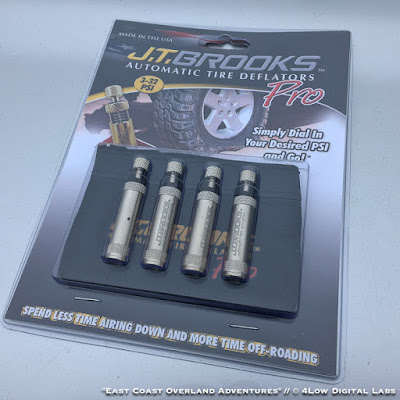 So in this post I’ll talk about the basics of deflators, what makes these “Pro” deflators pro, and how you choose between a basic set of delators and the pro’s.

What do they do?

It goes without saying that these delators, well, deflate a tire.  Basically by screwing them on to your valve step they will let air out.  There are two basic kinds of deflators: manual and automatic.

Manual deflators either screw on to the valve stem or act as a key to remove the valve core.  Either way you are responsible for monitoring pressure and stopping them when the desired lower pressure is reached.

In contrast, automatic deflators are pre-set to a desired pressure and will shut themselves off.  They are basically a mini valve that will close automatically so you can put them on and walk away without fear or your tires going flat.

Automatic deflators used to only come in one variety, single pressure.  Although the deflator itself could be calibrated to a set pressure – usually through a tedious process – they remain fixed at that pressure until you go through the calibrating processing again.  This usually involves some time with a tire, a compressor, and a six-pack of beer.  These new “Pro” deflators by J.T. Brooks are not only automatic, but they’re also adjustable.

The reason I am so enamored with the “Pro” ones is the flexibility to easily dial in a desired pressure. As an overlander there are many times the terrain and weather conditions will call for different tire pressures (more on that next week).  Most trail riders and rock crawlers can usually figure out an optimal pressure to run and are fine with the regular automatic deflators.

The other nice thing about the flexiblity of the “Pro” deflator is lending them out to friends with different sized tires, tire brands, tire types, rigs, wheels, weights, etc (again more on that next week). The pressure that might work best for me may not be best for them.  So being able to set/reset them quickly and easily without needing to go through a calibration process makes them much more useful than other types of automatic deflators.

The Good, the Bad, and the Ugly:

There are a lot of things I love about these deflators.  First, they are American made.  I know we live in a global economy and it’s very hard to hold true to buying only products made in this country.  That said, whenever possible I try to support American companies when I can.  I also like supporting entrepreneurs who recognized a need in the market, developed a product, and put it into production.  To read more about how J.T. Brooks got their start, check out their story here.

Another thing I love about these deflators are they are adjustable.  That’s revolutionary in my eyes.  There are lots of other deflators on the market.  Some are better than others but I think these “Pro” ones have set a new bar. They aren’t prone to mis-adjustment the way some externally calibrated deflators are.

Lastly, and this is pretty cool, they also have the pull-knob to kick-start the deflator.  Anyone who has used deflators in the past has probably experienced a “stuck” deflator.  You screw it on and nothing happens.  You then have to give it a flick with your finger (which usually hurts), smack it with a rock (which scratches the finish), or end up resorting to the old unscrew-and-rescrew trick (which is annoying and wastes time).  This pull-knob will allow you to not only kick-start the deflation process at street pressure but it will also allow you kick-start the deflation process on an already air-down tire which is practically impossible with most other automatic deflators on the market (I’ve tried).  So if you started out at something conservative like 20 psi and decided later in the day you need to do lower to something like 15 you can reset the deflator, screw it on, and pull the knob.  It’s that easy.

Now for the bad.  This isn’t so much about the deflator itself as it is about the packaged product as a whole.  My previous set of deflators (from a different manufacturer) came with an air gauge as well as handy chart of estimating air pressure based on tire-size and vehicle weight.  Obviously I’m being picky here, but those two items are fairly handy and wouldn’t add much more to the cost of the “kit” as whole.  I think they’d also be useful for people new to using deflators to help them dial in their pressure for off-pavement driving.  That said, it’s not a deal-breaker by any means since these are “Pro” deflators after all..

At first glance the only thing “ugly” about these deflators are the price.  However they are worth every penny.  Previous sets of deflators I’ve used have lasted years.  It’s pretty much a one-time purchase.  As I’ve mentioned before, being on a budget doesn’t mean being cheap.  It means knowing when and where to spend your money and spending it wisely on quality made products.  A set of these “Pro” deflators would be a very smart investment that will be in your kit for years to come.  As they say, you get what you pay for.  There are cheaper deflators out there but they don’t have the quality or flexibility these “Pro” deflators have.  The other way to look at it is time is money.  These deflators save time prepping and maximize time on the trail.  They also make sure you’re not abusing your tires too much at the wrong pressure which can be a money saver (tires aren’t cheap).

Now, if you are on a bit of a leaner budget, or can’t justify the premium for adjustable deflators, then check out the other two types of deflators J.T. Brooks offers.  Their “Keychain Tire Deflators” are the least expensive but are a manual style deflator.  Their “Standard Automatic Deflators” are the same superior quality of the “Pro Deflators” and feature the same pull-knob to kick start the deflator, they just lack the adjustability of the pro’s making them ideal for weekend trial riding or rock crawling when you only have to worry about airing down to one pre-set pressure.

In a future post (probably next month) I’ll do a side-by-side comparison between the “Standard” and “Pro” deflators and go through the calibration process.  I’ll also demonstrate how easy they “Pro” ones are to use.  Maybe I’ll make it a video.  For now I’ll keep this review about the “Pro” deflators since that’s what I’d recommend most overland types will be going with.
Next week will be a more detailed look at the pragmatics of airing down and the process you’d go through to select your pressure based on terrain, conditions, tire type, and vehicle weight.  As well as airing back up and how the combination of quality deflators and reliable onboard air help you properly manage tire air pressure and why it’s important!
Did you enjoy this post? Would you like to support it and help make future posts possible? Consider joining the ECOA Patron Support Team. For as little as $1 a month you can support the ECOA mission to Educate, Encourage, and Inspire readers like you!