Had I been a good boy I would have been 100% packed and ready to go by the time it was time to leave Thursday morning.  I would have gotten a full night’s sleep, taken a shower, eaten a healthy breakfast, and taken the dog for a walk.  But I wasn’t packed.  I did’t get a full night’s sleep.  I didn’t shower the night before.  I rushed through breakfast.  I only took the dog as far as the edge of the driveway and I was almost two hours behind schedule when I left.  Why?  The Olympics were on.

Luckily I was mostly packed.  I only needed a quick shower. I had one quick stop at the grocery store before rolling out of town.  Oh, and since CJ is part husky she’s not keen on long walks in the summer anyway.  Once I hit the road the radio was cracked up, the wind was blowing in the windows, and I had the Jeep pointed north.  Keep reading for my take on the 2016 MAOF…

As I mentioned before, attending an event as something other than a participant is a little different.  Like last year I was attending MAOF as an instructor.  This granted me early access to the site and first dibs on campsites.  On the way I had linked up with Phoenix, aka the “Token Tacoma,” and we planned on syncing our arrival and setting up camp together.

Upon arrival last year the staff at MAOF was very very organized.  A little too organized.  They had marked out rows of campsites in a 10×10 grid.  Of the few complaints I heard about the event last year, this was right at the top of the list.  This year our cries of foul were heard.  Not only had they dropped the small 10×10 campsites, but they had divided the area into two sub-camps.  Up on one hill was the “noisy” section.  On the other hill (site of last year’s camping area) was the “quiet” section.  In hopes of having a low-key weekend I opted for the “quiet” section.  This “free range” approach seemed more relaxed, organic, and more friendly to the overland lifestyle.

After picking a location with the tree line as a windbreak we went about making camp.  A few observations: level ground is priceless; I need a bigger awning; I need another pair of wheel chocks; when on a hill put the rear of the trailer facing up hill; I need my own shower.

Although I had already set the trailer up in basecamp mode at the PA Jeep Show, this would be the first time fully deploying the trailer and ez-up and doing so in a semi-remote location.  All in all things went well up until the point the trailer shifted off the leveling blocks.  Whoops.  As I said, I need another pair of wheel chocks.

Once camp was made it was time to socialize and we made our way down to the vendor area to check on things.  The first night is always a bit more laid back since most people with day-jobs wouldn’t be showing up till later.

The summer mix of heat and humidity made for a stormy day and night.  The weather reports leading into the weekend made it out to be a lot worse than it was.  Might also have been due to the location, but either way it wasn’t as bad as I was expecting.  In fact I never put on my rain jacket or my muck boots all weekend.  I was glad I had them though.

Friday afternoon I taught my photography class.  I’d be honest if I said I thought it went perfectly.  I’m also my own worst critic so I might be a little hard on myself.  Last year I had gone through the trouble of printing handouts.  I didn’t want to take the risk this year with the weather report being what it was (60% chance of storms).  When I started my class the weather was sunny.  I still covered a lot of good material, I just didn’t flow and transition as well as I could have.  For future classes regardless of weather I’m still bringing handouts… even if I have to stick them in zip-lock bags.

Once the class was over Josh from Bomber Products and I took a quick trip into town.  I showed him around downtown State College and we hit up the Berkey Creamery on the campus Penn State University.  It’s a worthwhile side-trip for anyone in the area.

When we returned to the farm it was social time.  I had offered up to host an informal happy hour and meet-and-greet along with Josh at his booth but not many people stopped by.  No big deal.  Still plenty of socializing going on with the “official” happy hour not far away.

Saturday was a free day for me and after a mid-morning snack Phoenix and I headed out to run a short loop he was working on in Bald Eagle State Forest.  Along the way we ended up running into some other MAOF attendees including the ARB USA reps, the Mountain State Overland guys, and a others.  Small world I guess. 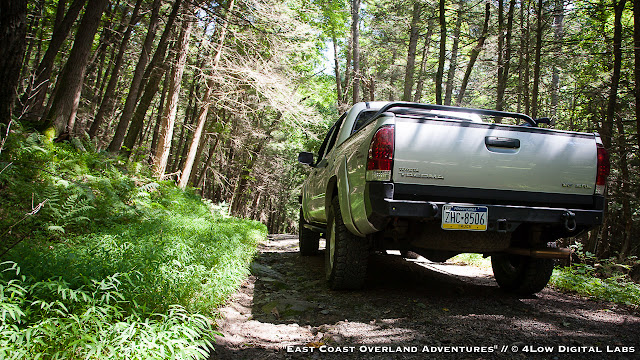 After logging a few miles in the mountains Phoenix and I hit up the local state park for some showers.  This was just after mother nature decided to hammer down on us with a shower of her own.  That meant low water pressure and a lack of hot water.  Still, the shower felt damn good.

Saturday night was more of the same with socializing around the vendor area.  That night was also the film festival and special talk by Scott Brady from Overland Journal.  The best part was the raffle.  Why? Because I won the coveted ARB Fridge/Freezer unit.  So if the fun, friends, and free beer hadn’t been enough… a free 12volt fridge was more than justification to attend the event.

Sunday meant the end of the event.  We packed up, rolled out, and I headed from the farm to the State College YMCA for a swim and another much needed shower.  After that it was a short drive to link up with some family in the area for an afternoon cookout.

Once home I was ready to rest, relax, and reset for my next adventure!