Home / Opinion/Educational/Humor / Back to Basics

I recently returned home from managing the Overland Demo Area at the 9th Annual Bantam Jeep Heritage Festival.  It was a modest display, but between my trailer, Dan’s Africa Jeep, and Eric’s Postal Scrambler and Bantam Trailer we did a solid job of representing the overland adventure lifestyle to the Jeep community. 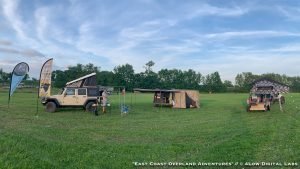 During the event we offered multiple sessions ranging from vehicle walk-arounds to talks on domestic and international overland travel, and even a few skills demos.  However, that’s not what this article is about.  Read on for my quest to get back to the basics of overland travel…

I owe my love of overland travel to my love of the outdoors.  I grew up a Boy Scout which got me into camping, canoeing, and hiking.  I also learned a lot of valuable skills like orienteering, pioneering, wilderness survival, first aid, and many more.  It was also through scouting that I began a career in outdoor education.  I started teaching merit badges at summer camp and then after I “aged out” of scouting i moved on to other outdoor education opportunities.

With my professional life being in outdoor education and much of my personal life being wrapped up in outdoor recreation I found myself in need of a four-wheel-drive vehicle.  My first car was a 1993 Ford Thunderbird.  My second car was a 1990 Ford Thunderbird Super Coupe with the factory supercharger and a 5-speed transmission.  Although fun to drive, neither car was well equipped for someone who’s life revolved around the outdoors.

in 2001 I got my first 4×4 was a 1987 Jeep Cherokee Pioneer.  At the time I knew nothing about Jeeps.  I just knew it had four-wheel-drive, four doors, and enough room for my camping gear.  Back then the whole “overland thing” hadn’t yet become a “thing” but there things like Expedition Portal and the awe inspiring Camel Trophy Series.  Like many my imagination was wild with ways to turn my Jeep into a exploration rig capable of conquering the world.  Sadly a career in eduction doesn’t really pay well enough to do so.  I was left to dream a little more modestly and think a little more locally.

It was through the Jeep community that I developed a love of off-road travel,  It’s also how I cut my teeth as a trail guide and tapping into one of my other passions which was photography.  After a very short-lived attempt at competitive rock crawling I found it was easier (and more importantly cheaper) to be an event photographer at a rock crawl competition than it was to be a competitor.  Thus began 4Low Digital Labs.

During this time I found myself hiking and camping less and Jeeping more.  Sure there were times I camped overnight at the off-road park. However it wasn’t the same.  I started viewing the world through the windshield of the Jeep.  I also found that world getting smaller as I spent a lot of time going to the same places.  The odd thing was it was such a slow subtle change in my life that I didn’t really notice what was happening until it was too late.

When my academic career hit a major speed bump in 2014 I found myself facing a bit of a identity crisis.  I was frustrated and annoyed with the trajectory of higher education.  I also found it less fulfilling than I was anticipating.  As such I found myself second guessing my chosen professional path.  With that in mind I began thinking about who I was, who I wanted to be, and what I wanted to do.

Having blended my passion of photography with my love of Jeeps into 4Low Digital Labs I thought about renewing my efforts in that direction.  However, the more I thought about it the more I realize it was still missing something.  I had neglected my love of the outdoors for my love of Jeeps. I had also found myself not traveling as far as often as I’d like.  I also realized most of my “Jeep trips” were to the same location rather than exploring new places.  Enter “overlanding.”

When I did the first No Highways Tour trip form Maine to Florida I tent camped along the way.  The Jeep was mostly stock with nothing more than a 1″ body lift and some 31″ all-terrains.  I survived off a 12″ cast iron skillet atop my old MSR Dragonfly camp stove and kept my provisions in the family’s old Coleman cooler from the 1980s.

I have since done what many enthusiasts in the overland adventure community do and grown and evolved both my rig and my kit.  I’m not going to lie, some of it was through corporate partnerships but there was still a lot of stuff paid for out of pocket.  There was also a lot of blood, sweet, and tears contributed by myself and some of my friends with the construction and evolution of the Poor Man’s Teardrop.

Recently though, as I sat there looking from my trailer to Dan’s Africa Jeep I realized how far from the basics I had come.  It’s not a judgement per se. It’s more a casual observation of the difference between American overland recreation and international overland travel.  It’s far too easy to get caught up in the commercialism that is running rampant through American culture.  We assume our success is somehow measured by the quantity of our “stuff.”  We also assume we need this “stuff” to do the things we want to do.  We fall into numerous traps like “time is money” and by saving time with a certain gadget or gizmo we somehow save money, yet it costs money to buy that “stuff.”  I myself fall into the trap of, “better to have it and not need it than need it and not have it.“

And then I sit there and watch Dan cooking on a vintage dual-fuel camp stove no bigger than a softball in a Jeep that is modestly, and humbly, built. In many ways we are kindred spirits.  We both went the DIY route on the bulk of our builds.  We both prefer vintage well used gear that is more reliable that it is flashy.  No need for a titanium spork when basic silverware does the trick.  That said, I began realizing I still had a lot more “stuff” than I needed.

One of my long standing lines is, “if someone can hike the Appalachian Trail with everything they need in a sack on their back, why do we as overlanders need anything more?”  I usually say it with my tongue firmly planted in my cheek as I turn and point to my trailer and confess my own misgivings with the old, “Be Prepared” motto from my days as a scout.

But don’t get me wrong. I’m not saying I have any major regrets with the decisions I’ve made building my Jeep or trailer, or in assembling my kit.  Sure with the privilege of hindsight I might have done a few things differently, but more so in their operational order not their substance.  Still, it makes me wonder where in the grand scheme of things the basics of overland travel end and the opulence of glorified car camping begin.  I also wonder where on that spectrum I stand with my trailer, awnings, Skottle, and comfy oversized camp chairs.

As I eagerly await the completion of the LS Swap in the LJ I can’t help but get excited.  I cannot wait to get back to adventure travel.  Sure over the last few weeks I’ve been able to co-opt my mom’s Jeep to use as a tow rig, so I’ve still been able to travel.  It’s just not the same.  The only reason I chose a Wrangler as my overland rig was for the open-air experience.  I like having the freedom to drop the top and dis the doors.  Can’t exactly do that in a loaded Liberty Limited or Grand Cherokee.  Sure remote start and heated leather seats are nice but, again, it’s just not the same.

Both vehicles are also very limiting for the type of travel I like to do.  With a few minor modifications either vehicle would make a super capable overland vehicle, at least in terms of soft-road capability.  I honestly have no issues towing the trailer cross country and hitting a few maintained dirt roads.  However for the really good stuff, like the Backcountry Discovery Routes, I need something a little more capable when it comes to the off-road side.

Thankfully the past few weeks have given me the ability to reevaluate things.  The LJ is hopefully going to be done sometime this summer.  That will leave me the entire fall season to go out and do some traveling between the fall events.  In the meantime I can rework the trailer some and go through my kit and seriously reconsider some of its components.  Do I really need four plates, four cups, four bowls, four forks, four knives, and four spoons?  That’s actually a legit question.  It’s also one of many I’ve been asking myself lately and I’m sure I’ll wrestle with in the coming weeks.

How can I get back to the basics of overland travel
without getting caught up in the consumerism of overland recreation?
Did you enjoy this post? Would you like to support it and help make future posts possible? Consider joining the ECOA Patron Support Team. For as little as $1 a month you can support the ECOA mission to Educate, Encourage, and Inspire readers like you!