The end of October my brother and I jumped in my Jeep and headed west toward Buchanan State Forest.  It was a relatively short drive (for us), and only about a half day of exploring, but it was a great day none-the-less. 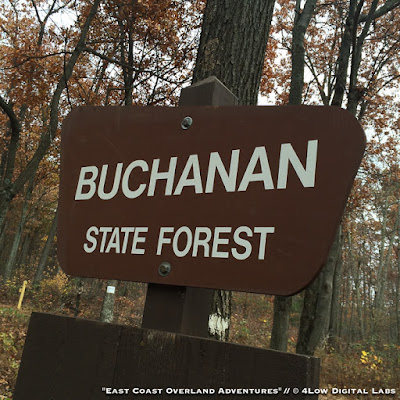 The goal for todays trip was to do some preliminary exploring for a future “One Lap” series writeup similar to the one I did on Michaux State Forest.  The idea is to put together a brief loop in/around/through Buchanan State Forest with overlanding in mine.

One of the first things noticeable on today’s trip was that the leaves have already turned and have begun falling.  The bright vibrant fall colors I saw in Vermont and up and Rausch in the early and middle parts of the month have since faded.

As mentioned in previous post on trip planning I had already done some online research on Buchanan State Forest.  Unlike Michaux State Forest which is over 85,000 of mostly contiguous forest land, Buchanan is a little smaller at just over 75,000 acres but it is distributed over 19 sub-tracts of forest land.  This doesn’t bode well vehicular based exploration, but something I turned up in my research did catch my eye for some foot-based adventuring.

Running right through the middle of the Buchanan State Forest is the Pennsylvania Turnpike.  Running east/west from Philly to Pittsburgh the Turnpike pretty much cuts across the lower third of the state.  What many people don’t realize is that sections of the PA Turnpike follow an abandoned railroad right-of-way that was plotted in the late 1800’s.  By the 1930’s the toll road was nearing final stages as a way to link the major metropolitan areas of the state.  In the 1940’s the turnpike opened and made use of the old railroad right-of-way along with a series of tunnels originally laid out dug for the railroad.

As the traffic volume, and truck size, on the PA Turnpike increased the two-lane tunnels were becoming a bit tight.   Some new parallel tunnels like Tuscarora and Blue Mountain were added but  with the cost of tunneling more expensive than cuts and fills, and trucks being able to handle steeper inclines than trains, it was much cheaper for the turnpike to make a new route over other mountains like Sideling Hill.  Although abandoned, the tunnels are still accessible by foot.

Since the old Sideline Hill tunnel is only accessible by foot (or bike if you’re so inclined) I decided this was a great opportunity to do some more experimentation with the GPS app for my phone.  I had done some route recording when I up at Rausch earlier in the month, this time I wanted to do some route planning.  This was nice because via the web-interface of the app I was able to measure the length of the hike from the parking lot to the eastern tunnel portal.  This was nice because I was able to switch back and forth between topographic maps and arial photographs.  Once the route was planned on the website I was able to sync my phone and update my mobile map with the route and waypoints.

With the maps and GPS in hand my brother and I started the mile long hike to the tunnel portal.  This was a scene right out of the TV show “Life After People.”  For those that have never watched that show the basic premise is what would happen to the infrastructure and buildings human kind has built is we, collectively, just disappeared.  The show doesn’t discuss the how or why we disappeared, just the what-if of the world continuing without us.  The show skips ahead in a day, week, month, year, decades and so forth showing the degradation of the manmade world as nature takes it back.

The westbound lane of the road was mostly clear and smooth.  The eastbound lane showed much more wear and a lot more reclamation by nature.  For the first few hundred feet it was kind of cool, but after a half-mile I was ready to get to my destination.

After about a half-hour of hiking, more than a few zombie references my bother and I were relieved to see the tunnel ahead of us.  The old roadway lies within the state forest and is a popular mountain biking trail, although the active nature of the trail is debatable.

It should be noted that there is a LOT of graffiti throughout the tunnel.  It’s exactly what you’d imagine it to be – drug references, penis drawings, immature jokes, and lots of tags.  Some of it is better than others, but just be warned you may have to explain a few things if you make this a “family” excursion.

After exiting the far side of the tunnel we took a few minutes to rest, snap a few photos, and then head back through the tunnel.  At just over two miles, and over flat ground, it’s by no mean a difficult hike.  For those looking for a shorter hike there is access from the west.  Also further west is a shorter tunnel.  I hope to explore this side of the mountain a little more in the future (Take 2).

After returning to the Jeep it was time for some vehicular based exploration.  In my map research I noticed that along the ridge of the Sideling Hill Mountain was an overlooked marked as a hang glider launching spot.  Figuring it would be worth checking out we snaked our way up the mountain and turned off pavement onto a forest road labeled Summit Road.

The second overlook required a brief hike of only a few hundred yards through the woods.  Probably not worth it after the hang glide overlook, but was still fun to get out and explore new territory and terrain.

Sadly commitments with family visiting from out of town necessitated my brother and to return to town. All-in-all the trip was a lot of fun for being only a half-day of exploring.  As the title implies this is only “Take 1” of exploring Buchanan State Forest.  With the LJ up and running better than it has in a long time (let me pause to knock on some wood)  I hope to spend a few more days this month exploring Buchanan State Forest some more.  I doubt there is enough for a solid one-lap series trip, but the neighboring Tuscarora State Forest holds some promise as well.  Maybe between the two I can put together a weekend trip of vehicular and hiking based exploration.
For more information on Buchanan State Forest, check out the DCNR website.  There is also a lot of information on the Pennsylvania Turnpike on the web along with some more info on the history of the abandoned South Pennsylvania Railroad project which formed the base route for the turnpike.
Hope you enjoyed this post and stay tuned for more on Buchanan State Forest.
Did you enjoy this post? Would you like to support it and help make future posts possible? Consider joining the ECOA Patron Support Team. For as little as $1 a month you can support the ECOA mission to Educate, Encourage, and Inspire readers like you!